Brisbane, the capital city of Queensland, is on the east coast of Australia, located on the banks of the Brisbane River and surrounded by the beautiful Moreton Bay and a series of spectacular mountain ranges.

With a population of 2 million and a warm sub-tropical climate, Brisbane offers an active yet relaxed way of life. The city features great galleries, cinemas, pubs, shopping and bustling weekend markets.

The city is ideally placed between Queensland’s famous Gold Coast to the south and the Sunshine Coast to the north. With a wide range of weekend travel options, Brisbane is both a perfect holiday and study destination.

The city area is located around the Brisbane River which is used as a medium of transportation in ferries and boats. Students and visitors to Brisbane enjoy a wide range of landscapes and lifestyles. The inner-city, metropolitan Brisbane is surrounded by leafy, sometimes very hilly, suburbs.

English is the official language spoken in Australia and all the education in Australia is in English.

Being such a large country Australia experiences varied climatic conditions across the country.

Australia’s indigenous heritage plays a defining role in the cultural landscape – creating and maintaining continuous links with the people and the land.

International Students studying in Australia have various housing options, they can choose to stay in Homestay Accommodation, Renting, Shared Accommodation. 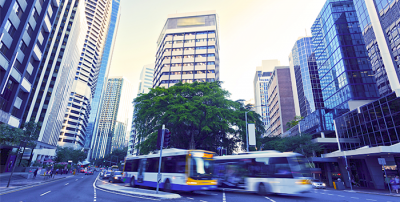 There are many options to travel in the campus.

Brisbane’s transport system is diverse, affordable and reliable. With a free city loop, a tertiary student discount, and late-night weekend services, it is also a relatively cheap way to get around the city.

Eligible full-time university, TAFE and post-secondary students can apply for a 50% concession fare on TransLink public transport services. To see if you are eligible and to apply for the concession fare, head to the TransLink website: gocard.translink.com.au/webtix

Trains are the best way to commute to and from suburbs located a long distance out from the city centre. There are 12 routes (Airport, Beenleigh, Caboolture, Cleveland, Doomben, Ferny Grove, Gold Coast, Ipswich/ Rosewood, Redcliffe Peninsula, Richlands, Shorncliffe and the Sunshine Coast). Most train routes run every 15-30 minutes, and depart hourly late at night.

There are hundreds of bus routes around Brisbane, which can take you from the CBD to the border of NSW at Tweed Heads. If you’re in the city, keep an eye out for the red stop signs around the city – they offer a free loop around the city during the day! Buses servicing the inner city are very frequent, arriving every 5-15 minutes. On Friday and Saturday nights, Nightlink buses run from the city and the Valley to surrounding suburbs from midnight to 5am.

The Citycat catamarans follow the snaking river downstream from the Northshore Hamilton ferry terminal all the way to the University of Queensland, stopping at key points along the river. In addition to the Citycats, there are the crossriver ferries and the free CityHopper, which only run to the other side of the river. Citycats depart roughly every 15 minutes, the CityHopper every 30 minutes and every 10-15 minutes for the cross-river ferries.

There are a few taxi ranks located around the city – these are specific areas where you can line up and get a taxi, otherwise you can try hailing one from the side of the road.

The first to launch, and still by far the most popular, is Uber. More recent arrivals to the Brisbane market include GoCatch and Ola, offering discounted rates during quiet hours of the day. The most unique ride sharing option available in Brisbane is the femaleonly service Shebah. All drivers and all passengers of the service are female, with the exception being males under 18 travelling with a female, and many cars come with car seats available.

Apply now as an international student to study in Australia. You can do this directly through Axis Institute if your English is very good, or through your local education agent if you need some extra help.

Experience cultural diversity, laidback culture, natural beauty, and the lifestyle of being an Australian student.

Nationally recognised training qualifications are courses that are accredited under the Australian Quality Training Framework (AQTF).

Easily accessible campus located in the heart of Brisbane CBD.

Our trainers are industry experts who are well connected to their fields.